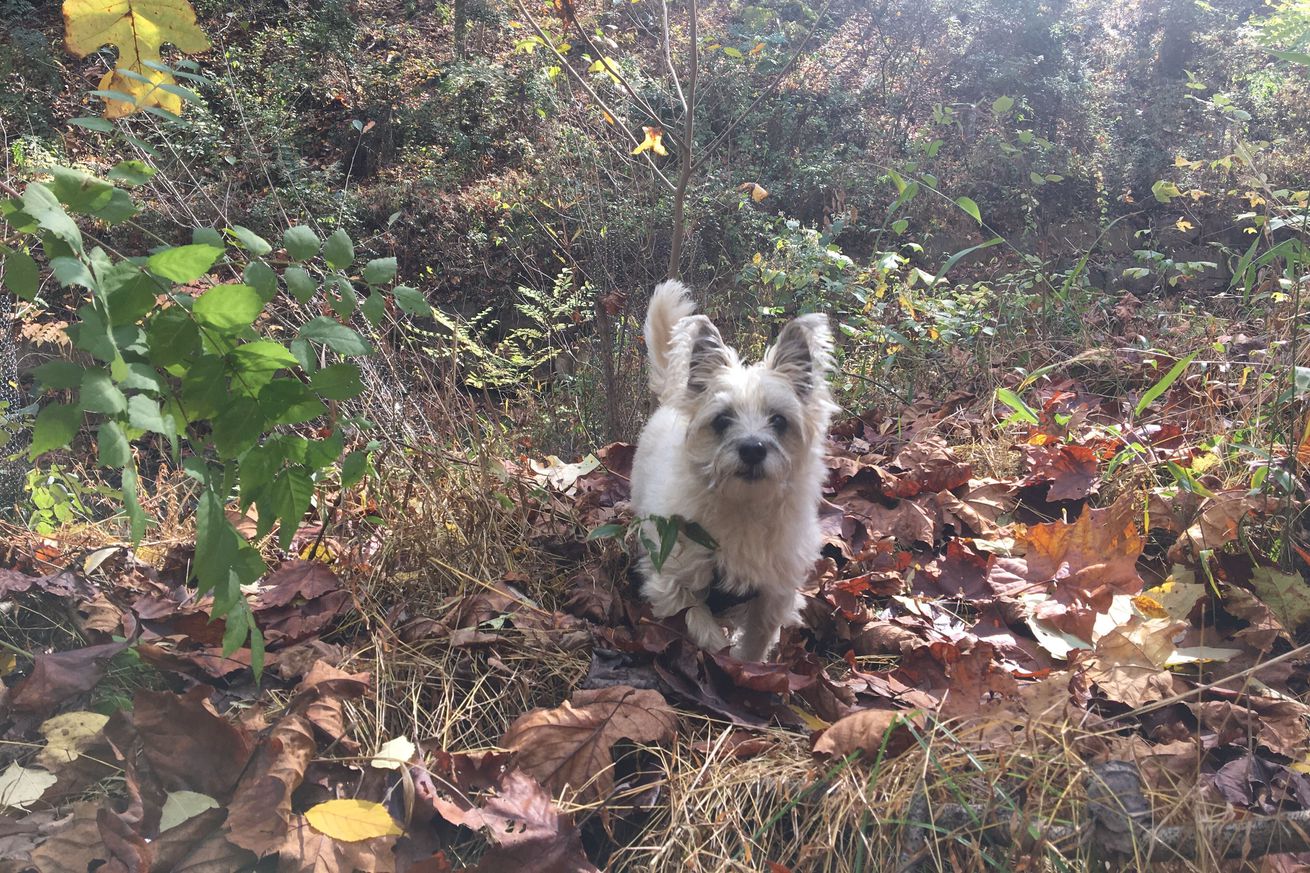 Hello everyone. Ok, that’s enough preamble. Let’s get to the pet photos.

Jordan is nearing his 14th birthday and still loves running laps around the house. He’s appointed himself sheriff of our household, and he demands order. If I’m at my desk at 2 p.m., that’s fine with him, but if I’m sitting there at 9 p.m., he squints at me and grumbles in a way that unmistakably comes across as muttering. Living with him is like living with an eccentric, weird, very short man. Every couple of months, he’ll start doing a new thing. The above photo, from earlier this week, documents his latest thing: if you cover him in a blanket, he’ll get up and walk around the house without bothering to shake it off, dragging his cloak from room to room like a sorcerer who accidentally transformed himself into a dog.

This is the light of my life Alfie out on a hike. Isn’t he something? I’ve had him for 11 years and I still haven’t gotten over it. Here’s a little about him:

Say hello to Bumper. Now say he’s a good boy. This reformed street urchin made his name in the alleys of Coney Island. He learned how to show affection by watching the bumper cars greet each other. He’s rad. Bumper’s got a little cauliflower ear where he took a swipe, he’s on the smaller size, and he voted Kucinich in 2004.

Side note: Bumper’s got FIV, a fairly common virus among cats, which isn’t a big deal other than it often causes people to not adopt them. Day to day, they’re just like any other cat. Take them to the vet once a year, make sure they’re good, give them love, repeat.

This is Chauncey, who came into my life about a year and a half ago by way of my girlfriend, Lilith. The thing about Chauncey is that he is a shameless little freak for my sweat. Can’t get enough of the stuff. He likes my shoes in particular because his is a nasty kinkster for foot scent. I’m fortunate that my feet don’t have much in the way of offensive odor, but there’s something in there he really digs. Here he is pictured with his head fully buried in my running sneaker. He’d sleep like that if you let him. He also goes nuts for the pits of my recently worn t-shirts. He doesn’t do this with any of Lilith’s shoes or clothes; his fetish is for my pheromones and mine alone. In fact, when it comes to me, he could take me or leave me; he’d bite me as soon as cuddle up. But he’s a good boy and we like having him around.

Once upon a time in Paris, a prize-winning cocker spaniel had an illicit encounter with a beagle. Chicken was the unwanted result, and was sold out of the back of a car to a roommate who subsequently moved to Belgium and left Chicken behind. This dog has moved country three times, crossing the Atlantic twice. I don’t think she noticed any of them, because she is almost entirely indifferent to anything that isn’t Chicken. Yes, she’s very cute. She’s also lazy, selfish, vain and would gladly trade me and everyone she’s ever met for half a treat: basically a cat who happens to be shaped like a stumpy little dog.

Antigone, meanwhile, was adopted from a shelter and apparently had a hard time of things prior to arriving home. For instance, she didn’t seem to know what dog food was when we got her, and she was and remains terrified of everyone and everything. She’s also a huge sweetheart, and when you pet her she makes whale sounds. Nobody believes me when I say this, so I’ll confirm: when you pet her, Tiggy makes sounds like a humpback whale singing. It is bizarre and wonderful and sometimes unsettling.

Hi, this is my cat Elfie. Or more accurately, I should say it’s my girlfriend’s cat and my current roommate, Elfie. He is a one-year-old seal bicolor ragdoll boy who loves to eat (sometimes steal treats from closets), sleep and do destruction when we are not around. He is currently on a diet to trim down in weight because of my previous indulgence in feeding him. Thus, he’s been a little grumpy lately. But I think he is doing a fantastic job. You can find him normally in his natural habitat, our sink, shoe shelves or occupying my chair. Speaking of him, I actually feel extremely blessed because around the time that I’ve met my girlfriend and welcomed Elfie into my life, I was dying to have a cat, and coincidentally enough ragdolls are the breed I was yearning for the most. Now I get to enjoy his company and random mischievousness everyday.

Trudy is my dog. She’s a good dog.

If you want to introduce us to your critters, we would welcome the opportunity to see/read about them.

This athletic flying cat makes yours look lazy as hell