If there’s one thing I’ve learned over the last few months, it’s that if I’m feeling something, someone else has almost certainly experienced that exact same feeling.

Our current state of the world has served as a reminder that we’re all in this together, and one thing I’m grateful for is the space to honor self reflection. During the pandemic, I’ve had the capacity to ask myself some really hard questions and actually think about the answers. What’s truly important in my life? Who do I want to be in five years, ten years? What has held me back in the past and how do I embrace opportunity with open arms moving forward? Why have I felt like I’m not enough?

It’s that last one that might feel familiar to many of you. After some digging, lots of journaling, and FaceTimes with my trusted circle, what I realized was that a lot of what I was experiencing and holding onto was this feeling of being stuck. Being stuck between two cultures, between two worlds, and two selves.

The more I continued to dig, the more I started to find stories of trying to reconcile identities between worlds. For me, it used to be about resolving the feelings I had of trying to carry on the culture my parents brought from India while also just wanting to fit in to the American culture around me. It was the struggle of never being enough when I was in school or growing up with my friends, while also never feeling Indian enough when we went to temple or were around our Indian family friends. Now this feeling manifests less as trying to fit in with the world I used to want, and instead trying to make up for lost time and try and fit into the culture that I tried to distance from growing up. It was, and now still is, being stuck in this no-man’s land and wondering if this is just how it is: never being quite enough for either world.

image via This Time Tomorrow

This episode from The Code Switch Podcast landed in my lap during my research and it hit me hard. What stuck out to me on this episode of “racial imposter syndrome” as they refer to it, was this quote from listener Kristina Ogilvie, that said, “‘living at the intersection of different identities and cultures’ was like ‘stumbling around in a forest in the dark.’’ Her follow up question was, “Do you hear from other listeners who feel like fakes?”, and the answer was yes. The quotes from the podcast and excerpts from the letters that influenced the episode were especially eye-opening — it was written proof that I wasn’t alone in figuring out my identity and what was actually mine to claim without feeling like a fake in my own culture. While the episode focused its lens on multi-racial experiences, one takeaway that can be broadly applied is that we’re not alone in the forest of not feeling enough of anything. Regardless of how we identify, there’s a resounding comfort in knowing that the struggle to accept our identity is not a lone venture. I’m getting better at acknowledging the feeling, but what I’m still working on is accepting and moving past it.

About a month ago, I came across this post from one of my favorite accounts to follow on Instagram, and the words stuck with me for days and weeks after. Sometimes I think the universe is listening extra closely, and as I worked through the words about reframing what it means to be “stuck” between two worlds, I also met a new Instagram friend. 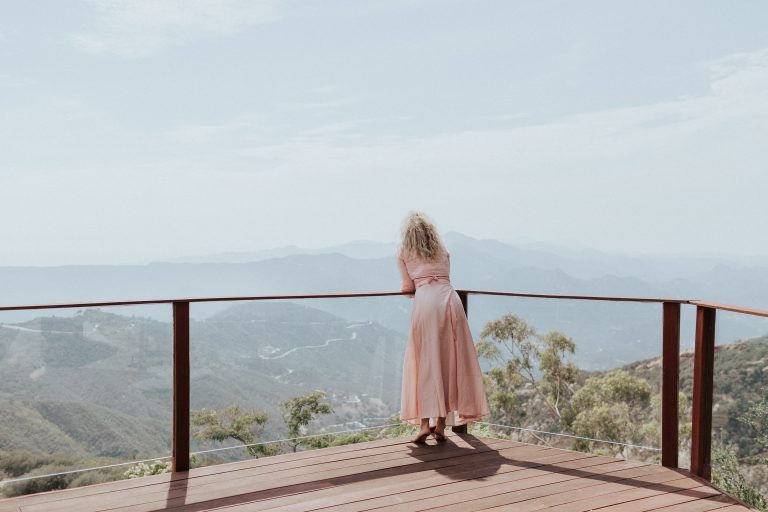 Dr. Saumya Dave, a psychiatrist and co-founder of This Is For Her, is also the author of one of my favorite reads of the summer, Well Behaved Indian Women, which in so many ways, perfectly encapsulated this idea of not being enough, and constantly working to prove to yourself that you’re worth it. We connected through social, and over a good old fashioned zoom call, I spoke with her about the idea of imposter syndrome and more specifically, how it can influence identity in relation to cultures.

“Having multiple cultures is hard.” Dr. Saumya told me as we were speaking. “Everyone’s fusion of their cultures is different, and everyone’s expectation of what the right way to be between those two is different. But the idea of not being enough is one of the most common things that I hear. It comes from a deeper place, and it’s about understanding where that feeling is coming from. It takes a long time to work through because the feeling has deep roots in identity, family history, and who we want to be, with so many influences at play. A lot of us are driven by a lot of guilt and pressure, and those can end up being the compass a lot of times for us.” 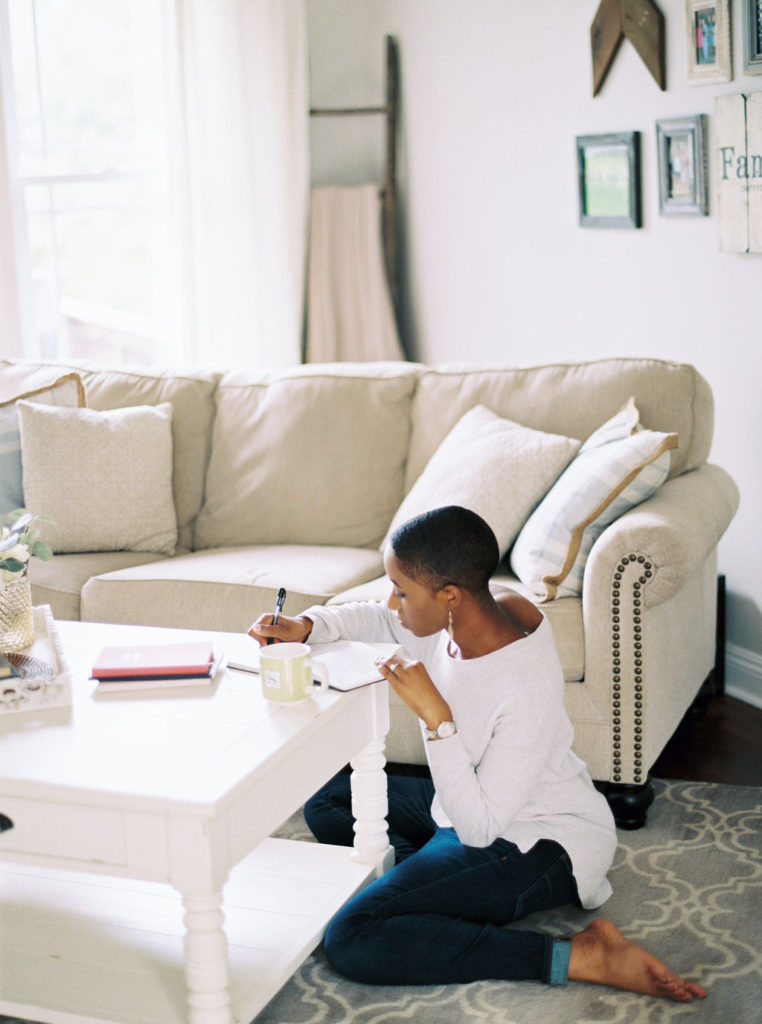 I realized that the guilt of pushing part of my identity to the side for so long contributes to my imposter syndrome; as though I don’t deserve to claim my heritage now since I ignored it for so long. And the pressure to try and make up for lost time adds an extra layer of stress. I’ve heard acquaintances in my community talk about how ‘’American’ us second gen kids are, and then I think, “But wait, I thought I was one of you?” And likewise, there have been times growing up in the US when I certainly felt “too Indian.”

What I realized most from my conversation with Dr. Saumya was that the only person who can and needs to accept our identity is in fact, ourselves. Everyone’s expectations are different, and we often let others influence and control that expectation. But when we move past what other people expect from us, we can accept and grow in our identity rather than trying to fit into a check marked box.

Richard Montañez, the inventor of Hot Cheetos (stick with me, and if you haven’t already, look up his story because it’s incredible), recently spoke at a diversity event at my work. And the quote I wrote down from his keynote speech was that “none of us are created to “fit in,” and there’s freedom in accepting that.” We’re created to not only share our differences but to celebrate our identities for exactly who we are. But when we are stuck in feeling like we’re not enough, how can we move past that? 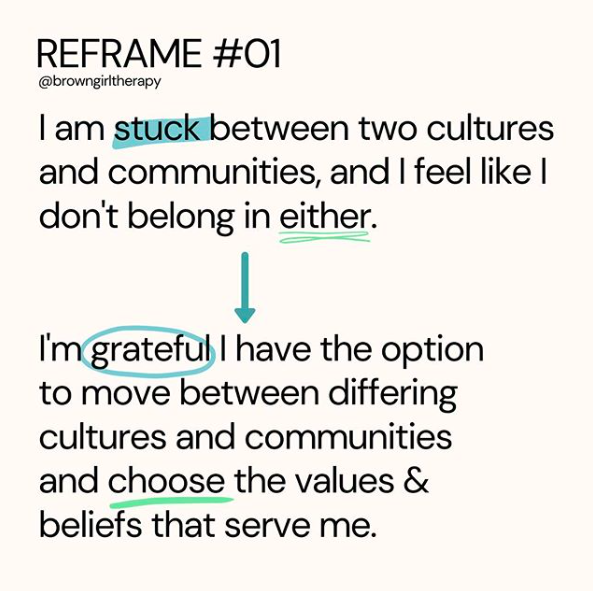 “Self compassion is the most important place to start, being easy and forgiving on yourself, and figuring it out in your own way.” Dr. Saumya told me in our conversation. “Imposter syndrome can present differently in different people, and the origins will vary, but the idea of not belonging is at the core. There isn’t necessarily a clear before and after [sorry, no lightbulb moment!], and it takes time to manage those thoughts.”

Awareness and reframing of thoughts was the technique that resonated most with me. Becoming aware of not only the thoughts that cross our minds when we feel like we’re not enough, but our reactions to those thoughts. There’s a strategy that Jay Shetty mentions in his book that works very similarly: the Spot, Stop, and Swap method.

Spot a feeling or issue.
Stop to understand what it is.
Swap in a new way of processing.

In this reframing, like the example above from @browngirltherapy, there are ways to capture experiences and reframe them to reflect the intrinsic motivation to get there. Dave emphasizes the power in writing these thoughts down to process them. Write down your feelings and shift the vantage point. Accept and honor the feeling, but work on reframing it so you can grow and move past it. The exercise has worked in helping me dig deeper into my thoughts and continue on this identity journey. Now when I feel stuck and need an extra hand to process the thought of not feeling enough for either world I occupy, I reframe:

I’m grateful I have the option to move between differing cultures and communities and choose the values that serve me.

This is my own experience of accepting and celebrating my identity while moving past the feeling of not being enough. I know that for everyone, it will manifest differently. There’s of course more to this story — how representation, mentorship, and advocacy can play a role in helping to alleviate this feeling, which is a conversation I’d love to have on another day – but this small reframe has made me realize how we can collectively work to accept ourselves for exactly who we are. And that single step can make a world of difference.

10 Built-In Shelves That Are Anything But Dated

How to Set Boundaries and Healthy Limits This Holiday Season