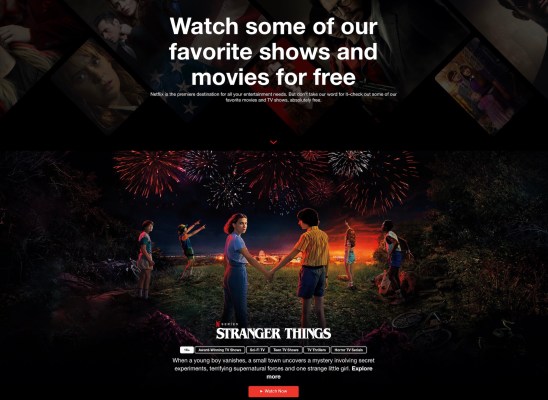 Over the past year, Netflix has attempted to expand its appeal in part by making a title or two free to non-paying users in select markets. Now the American giant is extending this test to users across the globe — with a larger free catalog.

The on-demand video streaming service is currently offering select Netflix Original movies and TV shows including “Stranger Things”, “Murder Mystery”, “Elite”, “Bird Box”, “When They See Us”, “The Two Popes”, “Our Planet”, and Grace and Frankie” to non-paying subscribers across all the nearly 200 nations and territories where it is operational.

“We’re looking at different marketing promotions to attract new members and give them a great Netflix experience,” a Netflix spokesperson told TechCrunch in a statement.

Users do not need to create an account to view these free shows or movies, Netflix says. The free viewing, first spotted by blog OnlyTech, is accessible only through web browsers. On a support page, Netflix says Android users can access this offer through their mobile browser as well — but iOS users can’t.

This isn’t the first time Netflix has tested making a title free to non-paying users. The streaming giant, which had over 151 million subscribers at the end of second quarter this year, has previously made “To All the Boys I’ve Loved Before” available to users in the U.S.

But this is the first time Netflix is making so many shows and movies (10, to be exact) available to non-paying users across the globe. The company has not shared how long it plans to run this experiment.

Speaking of India, the streaming giant has run several experiments in the country, one of the largest entertainment markets in Asia. It has explored making the service available for a few cents for the first month for new users, and is currently testing several affordable plans.